I am still shocked over what happened in Leeds the other day. A student killed his teacher… It made me think about the teachers I had in school. Some of them influenced my life and choices a lot. Teachers always do in some ways, don’t they?

In my short memoir I share how I became an author and here is the story. It was two of my teachers who told me about my writing skills when I was young. Thank you Ann-marie and Annika. You can download and read more stories from my life here: www.sofiesandell.com/about/my-story

An author in the making

When I was nine years old my teacher told me that I wrote in the same style as one of her former students who became a famous author in Sweden. Unfortunately, I can’t remember the author’s name – I only remember it was a woman and she wrote books for children. My teacher said to me, ‘Sofie, are you going to become my next student who becomes an author?’

A few years later another of my teachers said that the stories I wrote were amazing and very inspiring. She said, ‘I always want to keep reading your stories; you are a great writer.’ 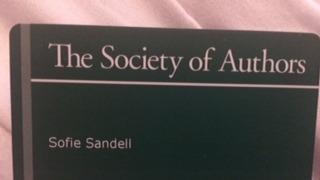 Since then I’ve known that I would write books. Sometimes you just know; have you ever had that feeling? It took me many years before I started to write my first book Digital Leadership. Before that I had several unfinished books on my computer. I’ve also written many blog posts and articles. The internet is fantastic and there are so many opportunities to share your thoughts with others. I can’t imagine ever not writing.

What is interesting is that despite this great feedback that I was a good writer, at the same time I found it extremely hard to spell correctly. Spelling was a nightmare. I went to something known in Sweden as a ‘special needs’ class for a few hours a week to learn how to improve my spelling. It was not until I was thirteen years old that I could spell properly. Today I think it’s my memory that makes me somehow see how words should be spelled, and I feel I have a very precise image memory. I also hated the English language in school; I found it very difficult and I just could not learn it very well. It was not until later when I had the chance to spend time in the UK that I could say I felt okay about the language. Now I speak English daily and it is one of my work tools.

In 2009/10 I pitched a TV programme to the BBC and Channel 4. It was a ‘smarter and more real’ version of The Apprentice, with participants working on real projects in their own lives. The whole idea was to see who dared to do something they thought was impossible. The concept was built on the idea that if you are in an environment with the right kind of support, you become braver and dare to take action. It was about taking action and making a difference in their local community.

To prove to the TV channels that I was serious about my idea I started a blog. The topics I blogged about were leadership, creativity and digital marketing. The content of this blog formed part of the content of my first book, Digital Leadership.

While training people in digital marketing and social media, I created a large number of PowerPoint slides and envisioned new ideas for training courses. I needed an outlet for my thoughts and shared the idea of writing a book with friends. At that point it felt as if my brain would explode with all the stuff I had in it about the world of digital marketing, social media, creativity and leadership.

I started to explore how to write a book. I spoke to people in the publishing industry and could not decide how to begin. There are a plethora of options around; it’s very trendy to write a book and there are so many ‘book experts’ out there – it all looked very confusing to me.

At the end of November 2012, I went to a friend’s book launch and that evening said to my boyfriend at the time, ‘I will start writing my book now’. The next week I started to record the first ten chapters of my book and hired a transcriber in the Philippines to write them out for me. I had bought an audio recorder for about £40 and was standing up as if I was lecturing when doing all the recordings.

Just over a month later I had sixty A4 pages ready. And in the end of March 2013 most of the content for the book was ready. My book went into editing and design and I published the book in September 2013.

I worked with an international team when creating my book – a British designer, a British/Jamaican publisher, an Australian copyeditor and a graphic designer from the Philippines. Plus I had a number of friends who all gave me feedback and proofread the book just before it went into print.

I love being an author. For me, it’s one of the best things in the world!

You can download and read more stories from my life here: www.sofiesandell.com/about/my-story