The first time I heard about wearable digital devices was when I was taking a short course in textile management in Sweden in 2003. We were shown a glove prototype from Hestra, a Swedish brand, where you could have your hands-free to your mobile phone inside the glove and talk straight into the glove. Instead of taking off the glove to answer your phone you have the hands-free set right there.

Little did I know that this was going to become mainstream with entrepreneurs around the world inventing new connected devices, virtual reality tools and a jungle of web applications that connect the world.

A few weeks ago I had the opportunity to test a new virtual reality (VR) headset. I’ve tested it before but that was ages ago, and it wasn’t very good then. This time I met up with leading VR technologist Peder Sandqvist at DigitasLBi in Gothenburg. He has been working with 3D and virtual reality solutions for years and gave me a great overview of the topic. Thank you again 😀 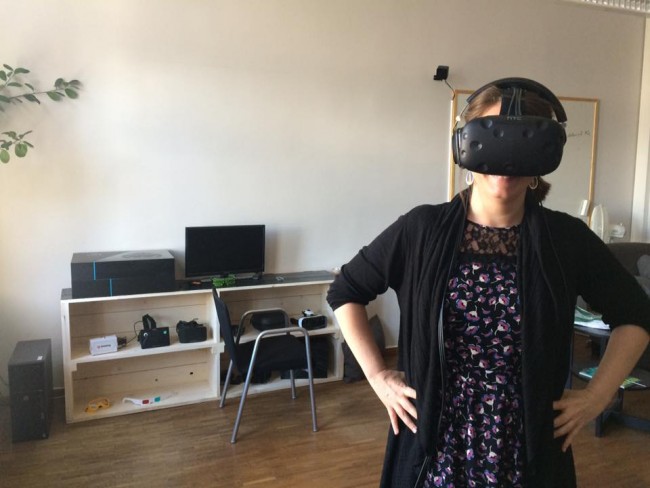 My geeky look in VR

How was it? Did I fall over? Did I get motion sickness?

I was thrown into a virtual sea world on a sunken shipwreck. My first reaction was that it was beautiful. It was as if I was in one of the scary scenes in Finding Nemo. I had whales swimming next to me and large rocks all around.

I found it amazing and for sure my experience will stay in my mind for a long time. It was not like watching a video; it almost felt real.

READ MORE   Q&A: Will my potential customers judge me by what I write on Twitter?

Then I tried out a commercial car experience. It was a virtual way for me to pick colours, wheels and other design extras. I could open the door and sit down inside the car and it was pretty nice. Did it excite me? Well, not that much. I’m not that interested in cars, so I’m probably not the right person to share my opinions about this VR application.

When I was wearing the VR headset, I felt a bit stupid. The gear is pretty heavy and you have other people helping you to move around. I didn’t suffer motion sickness, which I’ve heard is a big problem with VR.

Then I also checked out a game in VR. If you are a gamer and a geek at the same time you are going to love VR gaming.

I try to avoid playing computer games; it takes too much time and I get stuck easily. I realised this years ago when a friend got a new PlayStation, and I suddenly spent all my time playing a crazy skateboard game and a game where a cute purple dragon was looking for eggs. It was fun, but I felt stuck and got stiff in my body.

I think VR is fascinating as a topic. There are lots of uses for it in all kind of areas where we are only starting to learn what is possible.

Imagine watching a video in VR of a new house that is not built yet. In school you may experience a jungle in VR to check out how animals live there. In healthcare there are many studies looking at how you can work with VR and the brain. Tricking the brain is going to be a huge thing, both for forming new habits and helping the brain to disconnect during painful treatments.

A friend asked me if marketers need to care about VR. The answer is, it depends. Companies that want to be innovative and at the forefront of everything digital should go for it. I wouldn’t say that VR will be huge in the next two years, but in ten years I’m sure that it will be part of many people’s everyday lives. Until then I think the market is pretty small. No-one I know owns a good headset yet and I only own a Google Cardboard VR device. I got it for around £10.

Mark Zuckerberg invested in Oculus in 2014. When they, as the biggest social media platform have access to both the VR software and hardware, makes the whole VR thing kind of cool. It may mean that they will connect millions of their users virtually in the future? Who knows?

When you can get a cheap device that doesn’t have to be connected to a computer to work and that looks good, we will be ready, and even people like me may get a proper VR headset. The cousin to virtual reality, augmented reality (AR) is already big with Pokémon, Snapchat and all these funny faces people are adding on social media. Millions are having fun taking semi-real photos and chasing small Pokémon, and it gives anthropologists, even more, to think about why people behave the way they do.