The digital world and social media have certainly changed a lot of things when it comes to customer service. I’ve used Twitter an 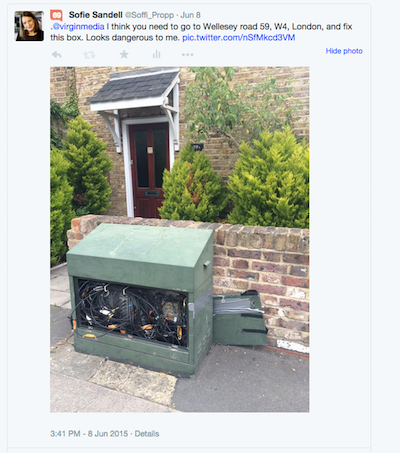 d Facebook many times to directly send a request for help or complain to a business and most of them have been quick to pick it up and redirected me into the right direction.

When I walk to the gym I’m passing several green boxes on the way, these have wires in them and are the basis for our broadband, phone and TV infrastructure. On a few occasions the door to these boxes have been left wide open because it’s broken, and it doesn’t look safe at all. Imagine a child sticking in his or her hand in it.

One day there were an engineer repairing one of them and I told him that there is another green box that is broken further down the road.

He asked me: ‘Is it a box like this one or smaller?’

‘Ok, then it belongs to Virgin media, I’m from BT, but will make sure I send them a request to fix it.’

Weeks passed on and nothing happened with the broken green box. I decided to tweet Virgin Media. I took a picture of the green box on the street and tweeted it to Virgin media. They replied and the next day they fixed the green box. #ThankYouTwitterForThat

I’m not a Virgin media customer any longer, but I could see the damage the broken box could do to the infrastructure and wanted them to fix it for the public good.

Then a few weeks later I discover a new broken green box on the same street. I do the same thing again, I tweet to Virgin media. The reply I get from them is that they can’t fix it over Twitter, and that I have to call them. For me calling Virgin media feels like hell. I used to be a 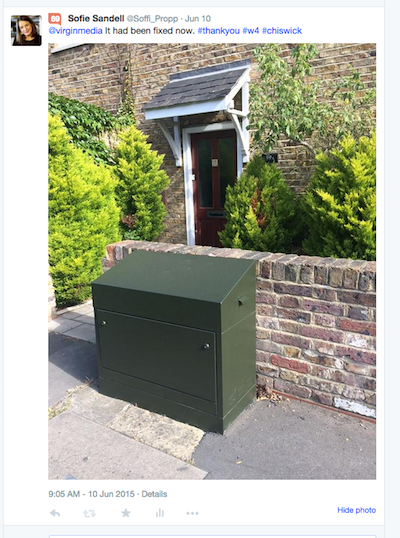 Virgin media customer and my experience with them wasn’t that positive. Tweeting feels much better compared to calling them.

After tweeting back and forth with the new person managing Virgin media’s Twitter account I give up. Now one week has gone and the other green Virgin media broadband box is still not fixed.

Shall I call them tomorrow? What do you think I should do?

Some people I know who lives in the area use Virgin’s broadband, and I know they have problems with the speed and connectivity. Maybe the damaged green boxes have anything to do with that?

The British society is obsessed with health and safety and I’m surprised that my second tweet was not taken seriously as the first time.

When I’m looking at the Virgin media reviews on Trustpilot I get a bit worried. An average of one star. Not good Virgin Media. I think you need to improve your game.

I made an effort to connect with Virgin Media over phone as they suggested about two weeks ago. It was all an automated voice mail connection where you left your details and address about the damaged green box. I passed the box yesterday and it’s still not fixed.

READ MORE   Digital Storytelling and the Creativity Behind It

This is not great Virgin Media. A safe and secure broadband connection is a matter of necessity for people using it.

If you are thinking of changing to BT in the UK here is the link. 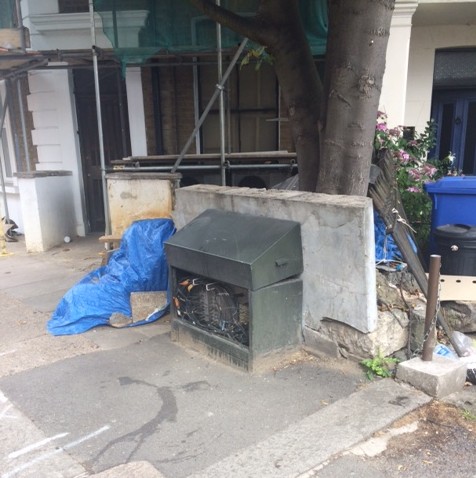 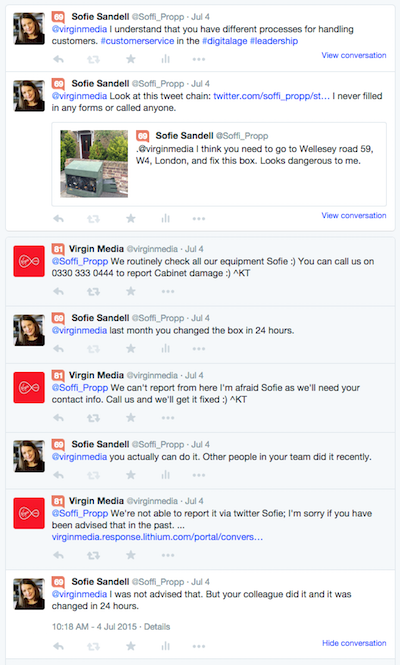