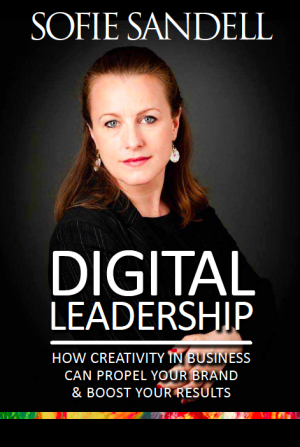 Sofie Sandell was one of the speakers at Junior Chamber International UK’s national convention 22 November in Leeds. Her talk about digital leadership covered how organisations can better nurture new and innovative ideas. Often people say no to new ideas without realizing that they might just have killed something that could help them to overcome a problem or bring in new business.

Consumers are becoming more and more demanding and to stay in business companies must innovate. The new ideas that will lead to innovation are likely to involve new technology. If you fear technology you will be left behind.

In one of the case studies she mentioned how HMV, which was founded in 1921 in the UK used to be an innovative business, but then totally lost its ability to innovate. Amazon has been selling books online since 1994 yet HMV still does not have an e-commerce shop.

The biggest fear for all businesses should be getting left behind. One way to avoid that is to learn how to nurture new ideas. Often we judge an idea when it’s far too young and tiny; you need to involve more people and build on it to make ideas grow. She also pointed out that it’s a good idea to have both a formal and informal process to develop new ideas.

Sofie Sandell was born in Gothenburg, Sweden, this is where Volvo and SKF have their headquarters. It’s an industrial city and 50% of Scandinavia’s industries can be found in a radius of 200 miles from Gothenburg. Sofie grew up with weekly news about businesses going bust, they could not manage the change.

The region around Gothenburg has many similarities to Yorkshire and what have happened there with its industry. Making people redundant and closing down factories and sites is depressing. To avoid that this will happen in the future everyone need to learn more how innovation and creativity works. Forbes ranked Gothenburg as the 12th most inventive city in the world September 2013.

In 2008 Sofie Sandell was President of JCI London and grew the chamber from 30 to 75 members that year. Ever since then the London chamber has had a membership of over 100 people. Other JCI roles which Sofie has undertaken are JCI UK Marketing Director 2009-2010, JCI UK Website Manager 2011 and JCI London TOYP project manager 2012.

Sofie’s mission for 2013 is to train at least 1,000 people in Digital Leadership and she has reached her target for this year. She has been exploring why and what it is that makes a business survive and thrive for over 15 years.

Sofie Sandell is based in London – she is a speaker, trainer and author. Her book ‘Digital Leadership: How Creativity in Business Can Propel Your Brand and Boost Your Results’ was published in September 2013.

Read more about Sofie Sandell and watch some of her speeches including TEDxUCL speech:
http://www.sofiesandell.com/about

Gothenburg in Swedish is Göteborg.