I was flying out of Landvetter Airport, Gothenburg Sweden, the other day and as usual, I was walking around the souvenir shop before heading to the gate.

One of my friends is a keen fridge magnet collector and I thought about getting one as a gift for her. When scanning what was on the board I saw two fridge magnets with busty girls in Swedish flag bikinis, one of them even had bouncing breast you could play with. I have to say that I was disappointed that a shop that sells exclusive gifts from Sweden was also promoting the sexist image of the ‘svenska flicka’, or Swedish girl. Swedish famous designer brands like Kosta Boda, Orrefors and Målerås were sold next to sexist symbols. 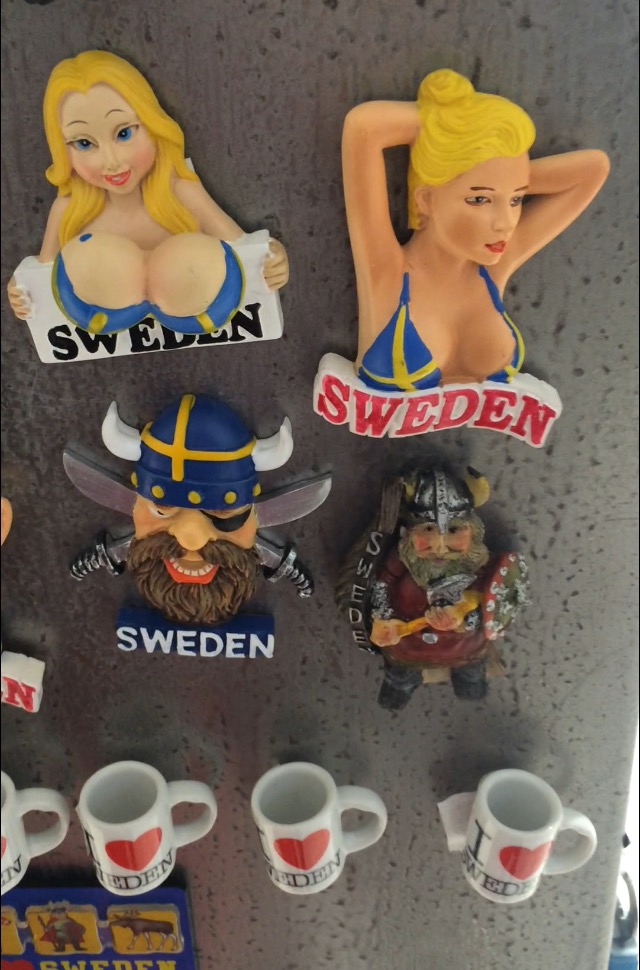 I’ve lost count of how many times I’ve seen men light up when I say I’m Swedish. They immediately think about liberal sex without any obligations. It’s not a huge problem, I can live with it. But hello, you are an airport selling exclusive gifts from Sweden, not a sloppy souvenir shop.

Sweden is a feminist country, our politicians are telling foreign media about it all the time, and these kinds of misogynistic symbols should not be the gift that we send tourists home with.

READ MORE   How much time should we spend improving the world?

We are a diverse country and stereotyping us is not fair. People always ask me if I’m a real Swede just because I have brown hair. I know it may sound stupid, but it happens all the time when I travel in my work and when I’m in London.

What do you think? Should Sweden promote blonds with bouncing breasts in Swedish flag bikinis and Viking men in the airport?

If yes at least you should have equally sexy Swedish hunks, a few brunettes in bikinis and why not Viking women as well. The Vikings were pro-equality, and I’m sure the women wore helmets with horns.

Shape up Landvetter Airport and review what you sell to tourists. You can do better.

If you are thinking about visiting Sweden read more on Tripadvisor.

I contacted the press officer at Swedavia on Friday 20th May, this is the company that runs all major airports in Sweden. They got back to me immediately. On Tuesday 24th May they got back to me again and confirmed that the fridge magnet had been removed. They also wrote that this kind of sexists content was not in line with Swedavia’s Code of Conduct.

I shared my blog post in three Facebook groups for Swedish people around the world. One was full of sexist Swedish men, I had to remove the post there. One was full of sexist Swedish women, and unfortunately, an admin removed the post, and then they blocked me from the group. It’s still in LondonSvenskar a 14,000 plus group on Facebook, the discussion in this group was balanced.

READ MORE   Behind every enlightened man there is an exhausted feminist