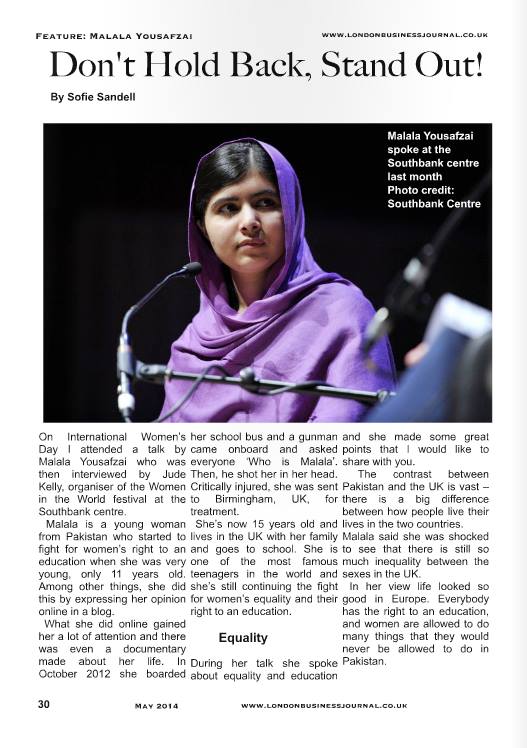 Kelly, organiser of the Women in the World festival at the Southbank centre.

Malala is a young woman from Pakistan who started to fight for women’s right to an education when she was very young, only 11 years old. Among other things, she did this by expressing her opinion online in a blog.

What she did online gained her a lot of attention and there was even a documentary made about her life. In October 2012 she boarded her school bus and a gunman came onboard and asked everyone ‘Who is Malala’. Then, he shot her in her head. Critically injured, she was sent to Birmingham, UK, for treatment.

She’s now 15 years old and lives in the UK with her family and goes to school. She is one of the most famous teenagers in the world and she’s still continuing the fight for women’s equality and their right to an education.

During her talk she spoke about equality and education and she made some great points that I would like to share with you.

The contrast between Pakistan and the UK is vast – there is a big difference between how people live their lives in the two countries.

Malala said she was shocked to see that there is still so much inequality between the sexes in the UK. In her view life looked so good in Europe. Everybody has the right to an education, and women are allowed to do many things that they would never be allowed to do in Pakistan.

But there are still some fundamental problems in the UK. There is hidden inequality in the so-called egalitarian Western world, and Malala brought this up on stage at the Southbank Centre in front of 2,500 people.

Sometimes when I debate about equality problems I hear comments such as ‘At least you are far better off in the UK compared with other countries in the developing world.’ Which is true, but that doesn’t stop us from creating a better society. The issues in the Western world are just more well hidden and embedded in our culture.

One thing Malala said was that women are discriminated against because they are powerful. I agree with this. As soon as a woman displays her power someone wants to label her as bossy or stubborn. This perception is still around, and as long as women are insulted for simply having an opinion we will not be living in an equal society.

For me as a businesswomen I have been discriminated against based on my gender several times, and I think all women have faced sexism, whether they choose to see it or not.

I use social media and my talks to highlight problems such as gender inequality. I do believe that we would live in a better world if there was less discrimination.

Businesses would make more profit and would be able to invest more fully in business and society if this issue was properly addressed. Half of the population is holding back because women are called names for having an opinion. Being labeled bossy is something most women dislike.

For over 20 years I’ve read and studied theories about equality that state that more gender equality in business will lead to higher profit, but not that much has changed. Google ‘equality leads to growth’ and you will find several studies that support this statement. But still we stagnate. There is not much being done to challenge gender inequality issues in business.

Today we have the option to start to educate our young citizens early. We can highlight this issue in school, and we can share our thoughts about gender issues using social media.

Malala encouraged everyone to not only share photos on social media networks to get more likes and attention, but also to actually share a message that will inspire and empower people to take action.

Words in all formats matter. We are also a generation that understands things visually. We are stronger together. If anyone you know shares a message that encourages political action online, pay attention to it. Don’t just ignore it. Like it. Share it.

The internet is democratic in the sense that anyone who has access to it can start sharing their thoughts online. There are many opportunities around for us to do this, and your thoughts might just be the thoughts that will inspire people and appeal directly to people’s hearts and minds.

It all starts with education. We must train our children to think about equality and we must raise awareness and promote the idea that we are all responsible for creating a more equal society.

When we think collectively we can create change that will last. No one single solution will solve the problem but hundreds of small actions will create a better society. We can’t wait for other people to do things for us.

We must all do something, whether we are young, old, male or female. And if anyone you know is taking action you must say to them the most important words in the world: ‘I support you’. These words make a huge difference to people who are creating change and enlightening the collective mind. Malala said that we are not using these words enough. We must use them more often.

Thank you to Jude Kelly for inviting Malala Yousafzai to speak. To watch the full interview you can go to the Southbank Centre’s YouTube channel.

The article was first published in London Business Journal May 2014