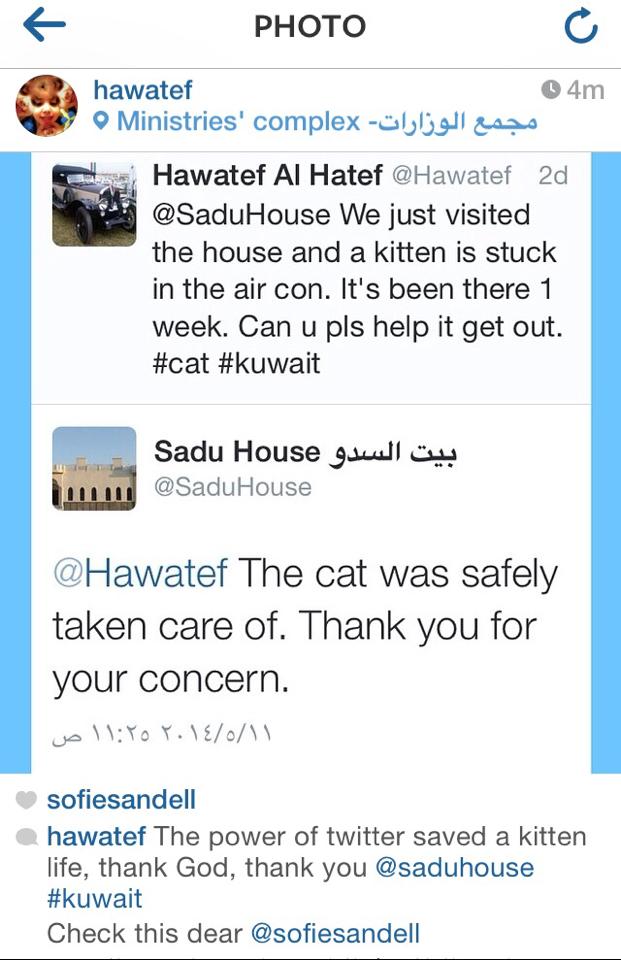 Twitter. After the conference my new Kuwaiti friend Safaa took me to a museum to show me how people used to live in Kuwait. In one of the rooms we heard a kitten stuck inside a wall. It turned out that it had jumped down into the air-conditioning system on the roof and couldn’t get out again.

The staff in the museum told us that they had tried to help it but they needed to open up the wall to get it out and to for this they needed management’s permission.

On our way back home we tweeted the museum and within a couple of days they had saved the kitten. Thanks, Twitter, for making it so easy for us to connect.

This trip was my first visit to an Arab country and I was extremely surprised by how people in Kuwait use social media.

I made three observations: People are as addicted to their smartphones in Kuwait as they are in the rest of the world; Kuwaiti people are not yet shopping online; and Instagram is at the heart of social media activity in the country. The social media network that matters most in Kuwait is thus Instagram, but Twitter is also widely used.

During my stay I visited five shopping malls which all housed big brands, especially luxury brands. One of the larger malls, Grand Avenue even has an IKEA in it.

A big part of Kuwaiti social life is spent in shopping malls. You go to shopping malls to meet friends, visit restaurants, go to the cinema, shop and cool down from the heat outside. How we explore online opportunities has a lot to do with what happens in our culture and society.

Social media in Kuwait is driven by sharing photos online and I think that this activity may be connected to spending so much time in malls and the desire to share what you like to look at and what you buy. You want to show off great photos to enhance your personal brand (status). If you just bought a new handbag you want everyone to see it. When someone posts anything on Instagram in Kuwait they immediately get a pile of likes, more than I have ever seen for Instagram posts in other countries. Just search for #Kuwait #Q8 on Instagram and you’ll see the huge number of hashtags.

I didn’t meet anyone who wasn’t active on Twitter and people use Twitter to stay up-to-date with what’s happening in politics. The government and all of its departments are also very active online. You can see a collection of some of this activity here.

I can also add that during the summer months it gets very hot in Kuwait, up to 50°C, so you don’t want to be anywhere that isn’t air-conditioned. When I was there the temperature was around 40°C, so I can understand why the cat wanted to chill down in the air-conditioning system, and why everyone was hanging out in shopping malls.

READ MORE   How to Build a Community through Social Media

During my visit I researched some tourist attractions online and I was disappointed to find that the website for Kuwait Towers looks as though it was designed a decade ago. A Kuwaiti told me that this was probably the case. This sadly does not reflect well on Kuwait in terms of it being a forward-thinking and digital-savvy country. Most people I met were very quick at picking up trends and the increase in web use in the country has been huge over the last few years. I would expect to see people in Kuwait using the web in new ways in the near future. 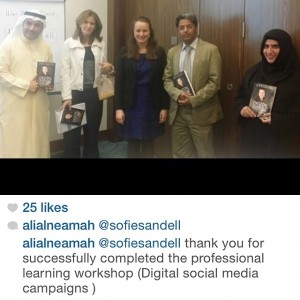 I met lovely people in Kuwait and they were very kind to me. Social media has and will play an import part in how all societies move forward. One speaker, Nasser Al-Mujaibel from Kuwait University, said that people in Saudi Arabia who watch YouTube are much more open to change and new ideas than those who don’t. Could this be true worldwide? Is YouTube broadening people’s world views? Probably yes!

One thing that surprised me was the lack of e-commerce in Kuwait. At the forum I listened to Mohammad Hijazi, a social media consultant from Lebanon, and he said that people in Arab countries are still very wary of shopping online. This is connected to the fact that the World Wide Web came to this region a bit later than it did to many other countries. It takes time for people to change their shopping behaviour.

In the Middle East, if you want to buy anything from Amazon you first have to get yourself a US or UK postal address and ship your order there. Several people I met who use Amazon had a deal with DHL in which they had a US or UK PO box and DHL would pick up the package from this PO box and then deliver the Amazon order to the purchaser in Kuwait. PayPal is not widely used and to withdraw your money from a PayPal account in Kuwait you need a US bank account.

It’s like in Europe where we are still hesitating about whether we should buy anything using our mobile phones while in Japan it’s very common for people to regularly shop using their mobiles.

Instagram is probably the biggest e-commerce channel in Kuwait. Brands just add a website or a phone number under a post and then people can get in touch and buy the items being promoted.

Other speakers at the 3rd Arabian Social Media Forum were: