I recently co-funded a start-up project online with help of a crowdsourcing platform. It was a very neat experience I would like to share the story with you.

It started when I got an email over Facebook from David Lowe an entrepreneur who I know from London. David is living in the US and  in his life there’s always been a new idea around the corner.  He asked if i could promote his new project/start-up Uberpong which is about making boring ping-pong paddles look more beautiful.

He didn’t ask me for any funding directly, only for promotion. By doing this he lowered the level of risk and I could decide what I wanted to do. Approaching your potential funders like this is one of the key elements in successful online fundraising. Don’t ask them to send you cash in the first conversation, ask them for their support. This method is used by the fundraising team behind Barack Obama, and they have as you know been extremely successful. 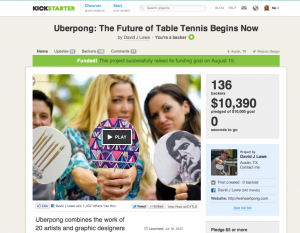 I love to support new businesses so I promoted the project on my Facebook wall and other social networks and I also made a donation.

They used kickstarter.com to raise money. I had never used it before so it was interesting to check it out live to see how it works. The platform was created 2009 and is now one of the most popular available.

The kickstarter.com website for the project was easy to overview and scan. They used tons of photos to show what the future of ping pong paddles will look like, which in this case is likely to drive more conversions (images are great for your website if you want to create higher engagement)

Most crowdfunding projects give you a reward if you support them, it can be a DVD if you support a film, tickets to an event or as in this case a ping pong paddle. I didn’t want a reward at all for my sponsorship so I went directly to checkout. The check out step was super easy and they asked me to use my Amazon account.

After the check out there were several ‘Thank you’ emails sent out and I also got to know when they reached their target. In total is was great engagement during the process. If you want to follow the story the Uberpong website goes live this week. 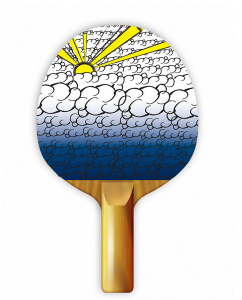 I believe this kind of funding is the way forward for the future and kickstarter will launch in the UK in October. It’ll be interesting to see how well they will do in the UK.

You can use crowdfunding for almost anything; events, a record, an invention, a book  and there are loads of platforms on the market. On this website you’ll find some of them.

Crowd funding or crowdfunding (alternately crowd financing, equity crowdfunding or hyper funding) describes the collective effort of individuals who network and pool their resources, usually via the Internet, to support efforts initiated by other people or organizations. Crowd funding is used in support of a wide variety of activities, including disaster relief, citizen journalism, support of artists by fans, political campaigns, startup company funding, movie, or free software development, and scientific research.

Crowd funding can also refer to the funding of a company by selling small amounts of equity to many investors. This form of crowd funding has recently received attention from policymakers in the United States with direct mention in the JOBS Act; legislation that allows for a wider pool of small investors with fewer restrictions. The Act was signed into law by President Obama on April 5, 2012. The U.S. Securities and Exchange Commission has been given approximately 270 days to set forth specific rules and guidelines that enact this legislation, while also ensuring the protection of investors.